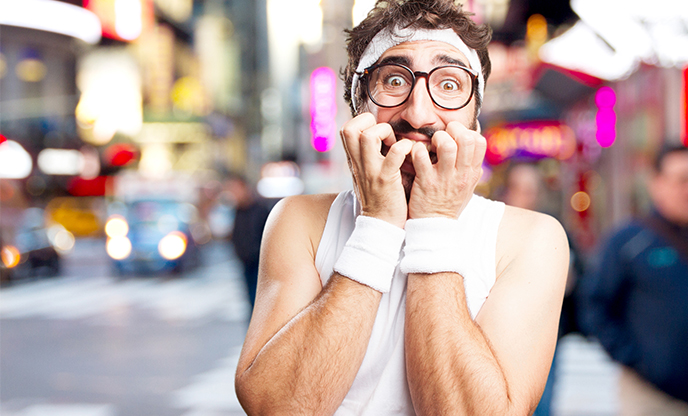 Why don’t we like old-fashioned moves? Simple. Because they don’t train the core to do its actual job. And over time, doing these exercises can get you hurt. Because the core is not really meant to initiate movement, as it does when you perform a move like a Sit-Up.
Instead, the real job of the core is to create stability and stiffness in the torso. You could equate this to the feeling you’d have in your midsection if you braced yourself for a punch in the stomach. The bracing helps protect the thick vertebrae in your lumbar spine, along with the cartilage discs separating those bones.
Properly braced, lumbar vertebrae can handle a lot of force up-and-down—just watch any powerlifter Squat with several hundred pounds on their back for proof. But the anatomy of the lumbar spine makes the area less suited for the type of twisting and bending you can achieve with your upper back or neck. In fact, that type of movement has the strong potential to herniate one of your lumbar discs—especially if you’re handling a load.
So, can someone who has a healthy spine and a decent base of core strength do Sit-Ups or Crunches and be ok? Sure.
But ask yourself: Does it make sense to train using exercises that involve movements that are proven to cause injury?
So instead of old-school “movement” exercises, a growing number of elite coaches and trainers are using “anti-movement” core exercises, which teach your core to resist movement in multiple planes of motion.
The most basic example of this is the Plank. When you hold a Plank, the core muscles on the front side of your body work to prevent your lower back from arching or dipping toward the floor. “Moving into extension” is what the Exercise Phys types call it when your lumbar curves this way, so appropriately, a Plank is called an “anti-extension” exercise.
Similarly, there are also anti-rotation moves that—you guessed it—teach your core to prevent twisting and turning. Anti-lateral flexion moves teach your core to prevent bending sideways.
Why does all of this matter? Simple. A core that can brace and resist movement makes your body more effective at moving and generating force. Improving our core stability increases your power, efficiency, and control in nearly every sports skill imaginable.

You’re doing way too many moves

By taking a less-is-more strategy, you’ll be better able to tell how well your core performs at specific functions. You’ll get a clearer picture your own core strengths and weaknesses. You’ll more effectively target the areas you really need to work on and make more targeted improvements.

Simply put: It’s better to do a few things well than many things poorly.

You’ve heard of the “ab finisher,” right? Well, let’s just say that if that’s all you’re doing for your core, then what you’re doing won’t cut it.

Look, we get why people think they should perform their core routines at the end of a workout. They don’t want to wear out the core muscles they’ll need to protect the spine during heavy lifts. They like to wrap things up with something challenging. They like to catch a glimpse of their pumped-up six pack in the locker room mirror before hitting the showers.

That’s all fair enough. But honestly, there are a lot more compelling reasons to do core work at the beginning of a training session. In fact, failing to do any core work ahead of your workout is a missed opportunity.

The core serves as the foundation for movement. For example, during a Deadlift, your core muscles tighten and help keep your spine locked in place as you pull what could be hundreds of pounds off the floor.

If those core muscles aren’t properly prepared, how can they be the pillar of strength they need to be during that movement?

The danger here is real. With insufficient core engagement during a Deadlift, your spine might bend forward (or “fall into flexion”) during the pull, putting your spine and its discs in jeopardy—all because you were saving your core work for a killer crush session at the end.

The solution here is simple: Add core work to your warm-up. In fact, do it right at the beginning of your warm-up to activate your core musculature and make sure it’s ready for the more intense exercises to follow.

You don’t need to go overboard. One or two moves will cut it.  one or two core moves, such as the Core-Engaged Dead Bug, Bird Dog or Single-Leg Lowering, for a single set of 5-10 reps.

These moves will warm up the core, help restore your posture and even help you correct faulty breathing patterns or movement patterns, making the rest of your warm-up—and workout—that much better.

Your workout isn’t changing over time

The only way to get stronger is to challenge your body. When you place new stress on your body, such as adding more weight to a barbell, your muscles adapt and get stronger.

Your core muscles are no different. However, too often people follow core routines that they’ve taken off the Internet or were shown by a friend, which don’t include any progression whatsoever.

Over time, you’ll hit a plateau. The moves will get easier. At first, that’s because your core muscles are getting stronger. But eventually, it’ll just be because they’re “used to it.”

The only way to build a truly strong core is to treat the exercises you do like you would the Bench Press, Squat or any other strength move. Always strive to challenge your muscles.

There are three primary ways to make a core exercise more difficult:

You can also change the speed—but not in the way you think. Faster isn’t better here. Slower the exercise down, focus on your form and breathing, and watch how much more difficult even seemingly simple, “easy” moves like a Bird Dog can be.

You don’t have a plan!

With all this said, there’s one key element you need to be doing to ensure that your core is getting stronger: Write down what you do every single workout.
Keep track of the exercises you do and for how many sets, reps/time, weight used and rest. Note if you feel like you can increase the difficulty in the next workout. This takes the guesswork out of progression. You know exactly where you stand and can see your numbers climbing.
But if you really want to strengthen your core, you need to take it a step further. Just like with your strength training, you need a plan—one that develops all of the aspects of the core with safe and effective exercises, and sensible progression over time. That way you can go into every workout never having to guess or wing it. And you’ll know that what you’re doing today will help you build toward tomorrow.