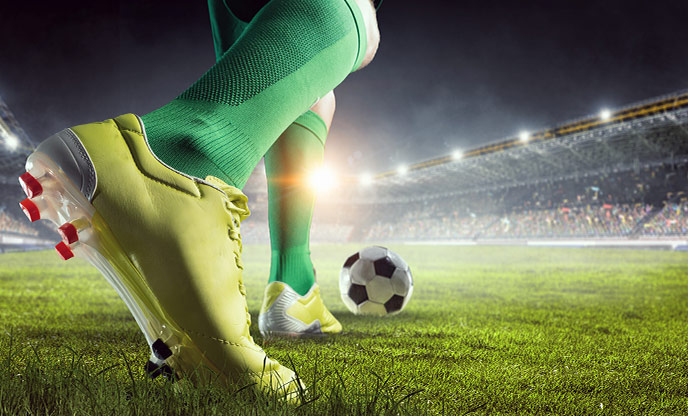 Football (Soccer) is one of the oldest sports in the world and with that; it’s also one of the most recognized. The pinnacle of the international game comes in the form the Football World Cup. There are also tournament such as the Euro Championships, Copa America and the African Cup of Nations. Domestically the strongest leagues come from England (English Premier League), Spain (La Liga), Italy (Serie A) and Germany (Bundesliga). In parts of the world the sport is also known as Soccer.

Get your head in the game

The aim of football is to score more goals then your opponent in a 90 minute playing time frame. The match is split up into two halves of 45 minutes. After the first 45 minutes players will take a 15 minute rest period called half time. The second 45 minutes will resume and any time deemed fit to be added on by the referee (injury time) will be accordingly.

Each team consists of 11 players. These are made up of one goalkeeper and ten outfield players. The pitch dimensions vary from each ground but are roughly 120 yards long and 75 yards wide. On each pitch there will be a 6 yard box next to the goal mouth, an 18 yard box surrounding the 6 yard box and a centre circle. Each half of the pitch must be a mirror image of the other in terms of dimensions.

Essentially the equipment that is needed for a soccer match is pitch and a football. Additionally players can be found wearing studded football boots, shin pads and matching strips. The goalkeepers will additionally wear padded gloves as they are the only players allowed to handle the ball. Each team will have a designated captain.

To score the ball must go into the opponent’s goal. The whole ball needs to be over the line for it to be a legitimate goal. A goal can be scored with any part of the body apart from the hand or arm up to the shoulder. The goal itself consists of a frame measuring 8 feet high and 8 yards wide.

To win one has to score more goals than that of your opponents. If the scores are level after 90 minutes then the game will end as a draw apart from in cup games where the game can go to extra time and even a penalty shootout to decide the winner. Players must use their feet to kick the ball and are prohibited to use their hands apart from goalkeepers who can use any part of their body within the 18 yard box (of which more can be found out in the next section).