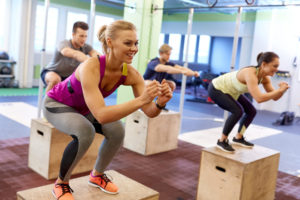 What is a Box Squat?

The box squat is a squat variation that can be used to increase general squat strength, enhance posterior chain engagement, and address weaknesses in squat performance due to sticking points. The box squat is performed using the regular back squat (low bar) patterning. Note, coaches and athletes can vary the height of the box to address
weaknesses in a lifter’s squat performance.

What is a Regular Squat?

The regular squat also called the back squat, is one of (if not the) the most well-known and recognizable barbell strength movements. It is a foundational movement for general squat strength and lower body development. In addition, it is used throughout strength, power, and fitness sports to improve competitive performance.

Now we will break down three training outcomes coaches and athletes should consider when determining which squat movement is best for athletic and sports performance. Which is Best for You?

Are you a Competitive Fitness Athlete?

Competitive fitness athletes can benefit from including both the box squat and regular squats into training programs on a regular basis, as they must express both strengths, fitness, and weightlifting technique in competition. The ability to vary squat training should be used on a regular basis with competitive fitness athletes to address weaknesses in squat patterning, strength, and muscle development, which can play a role in improving overall athleticism.

Are you an Olympic Weightlifter?

Generally, the regular squat is the premier strength movement to develop leg and back strength for Olympic weightlifters. In addition to the front squat and various pulls, the regular squat is used to drive up strength in specific patterns (high bar back squat) to translate to increased clean, jerk, and snatch performance. In some training systems,
partial squats and pause squats are used, as well as box squatting to increase specific strength needed to certain positions.

Are you a Powerlifter? Or a Strength Athlete?

Powerlifters and strength athletes can benefits from both movements equally. In these strength sports, the regular squat (no pause, and no box) is the objective test performed in competition, and therefore holds a high value to practice and train it to develop necessary strength and technique. With that said, the box squat can be used to isolate specific ranges of force development that may be lacking in these athletes address issues with achieving depth in a squat and/or to isolate either greater quadriceps or posterior chain development.

To conclude and make sense for you, absolute strength is key in these sports, making it beneficial for you to use both of the squat variations on a regular basis!