Home » Blog » Punch These Rules Inside You

Punch These Rules Inside You 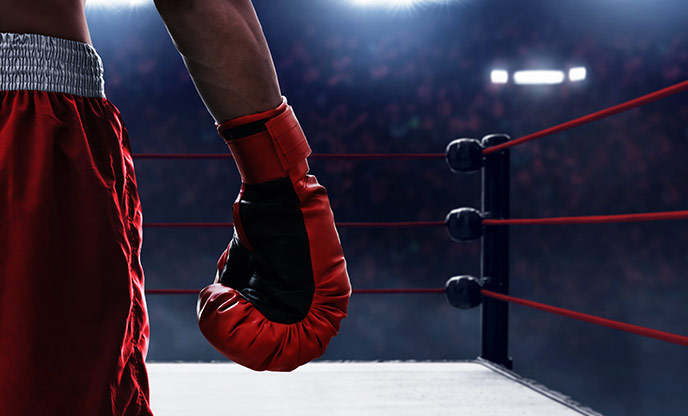 An effective offense depends on the ability to throw punches quickly and to place them strategically to penetrate the opponent’s guard. Defensive tactics include parrying or warding off punches with one’s upraised arms and gloves, moving the head evasively up and down (“bobbing”) and side to side (“weaving”), and bending or twisting one’s head and upper body out of the blow’s path. Footwork is important to both offense and defense. The two generally recognized stances are “orthodox” and “southpaw.”

The former has the left hand and the left foot forward, the latter the right hand and the right foot forward—the foot or hand that is forward is known as the lead. Boxers using orthodox stances ordinarily are right-handed and rely on that hand for power, using the left hand to jab and hook; the converse is true of southpaw boxers, who are usually left-handed. In either stance, the lead hand is extended forward in front of the body and the other hand is held near the chin for protection, the chin is tucked into the chest, and the shoulders are hunched. There are individual variations.

There are four basic punches: the jab, hook, uppercut, and straight right (straight left for a southpaw), which is sometimes referred to as a “cross.” All other punches are modifications of these basic punches. The jab, whether thrown from an orthodox or a southpaw stance, is a straight punch delivered with the lead hand, which moves directly out from the shoulder. The hook, also thrown with the lead hand, is a short lateral movement of arm and fist, with elbow bent and wrist twisted inward at the moment of impact. The uppercut is an upward blow delivered from the direction of the toes with either hand. The straight right or left is thrown at shoulder level with the back hand, usually as a follow-up to a jab from the other hand.

The jab is a straight blow delivered (generally from a distance) with the arm above the lead foot (the left arm and foot for the right-handed boxer). The punch is quick and explosive.

The hook is delivered with a bend in the elbow. The hips twist in the direction of the punch as it is delivered.

The uppercut is delivered with a twist of the hips and lead foot (which is also raised on the toes) in the direction of the blow. This upward punch is usually directed at the head.